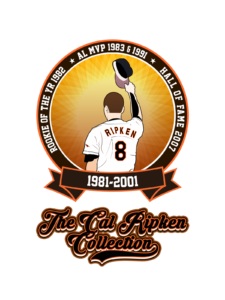 My name is Rob.  I grew up just outside of Baltimore in the 80s and 90s.   During that time there was not much to be excited about as an Orioles fan.   They were not very good, but I still enjoyed going to games with my dad, and seeing Cal Ripken play.

He was by far my favorite player, and my baseball card collection reflected that.   I had a few dozen Ripken cards including a rookie, which was the envy of all of my friends.  It is comical to see that card now, because it is a terribly off center 1982 Fleer that is barely worth anything anymore.  Back then, to a kid in elementary school, it was priceless.

Fast forward a few years.  As I entered in my high school years, and baseball card collecting became less cool, I put all of my cards in a box in my parents basement and forgot about them.

My interview with Patrick Greenough from Radicards.com about my Ripken Collection. It was exciting to speak with him about my hobby, and share what my collection means to me.

In 2013 my parents called me and told me that they were cleaning the basement and they wanted my crap out of it, and if I wanted to keep it I would have to take it to my house.   I went over and rediscovered my old cards.   I had been out of collecting for 20 years or so, and I thought I had hit the jackpot.  I took the cards to my local card store hoping to make some money.  What I found out was that pretty much everything I had was worthless.  Even complete sealed sets did not even receive an offer.

I thought for sure the Ripken’s would get some money, but everything I had was junk era base cards.  After being discouraged that I was unable to even GIVE away the cards, I decided to collect again.

A lot of the Ripken’s I had from my youth were not in good shape.   I found out that they could be replaced with better cards for fairly cheap.  So I went through and replaced most of the cards I already had.   Once I did that, I began adding to the collection with other fairly inexpensive cards, and was greatly enjoying gathering cards I remembered from growing up.  As the collection grew and grew, so did the cost of the cards.

Before long I was lucky enough to come across a group of older collectors who were no longer collecting and willing to sell their collection.   I had hit the jackpot.  Cards that had not been up for sale in decades were falling into my lap.  My collection quickly ballooned to one of the largest that I have known about.

I had this large amount of cards sitting in boxes in a cabinet, hidden away from everyone, so I decided to go back through them all, scan them, and put them up online for others to enjoy.   That is truly what is at the heart of this project, taking these cards out of the closet and cardboard boxes, and putting them out there for people who may have never seen or known some of these cards exist to check them out.

I stopped collecting in 2017.   I had amassed some many different cards, it had become increasing difficult to find things that I needed.  The thrill of the hunt was gone.   I had also become increasingly frustrated with the state of the baseball card industry.   In every set there were dozens of different variations of the same base card.  The card companies were taking old, worthless cards, and reissuing them with a stamp on them as something new.   I felt it was time for me to move on and sell off my collection.

Over the decades of collection I have met a lot of interesting people.  Many of whom I consider friends.   It was a great community that I really enjoyed being a part of.   I am hoping this site will keep me connected to the Ripken collectors out there, and can continue to be a resource for years to come.

I hope you enjoy seeing these cards as much as I have enjoyed collecting them. 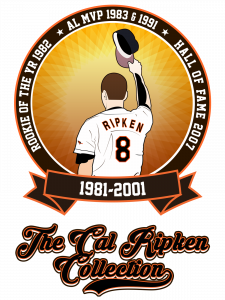 ABOUT US
I am a Cal Ripken Super Collector. Over the years I have grown my collection into one of the largest that exists. I enjoy sharing my collection with others and finding the rarest cards
Contact us: [email protected]
© The Cal Ripken Collection- All Rights Reserved